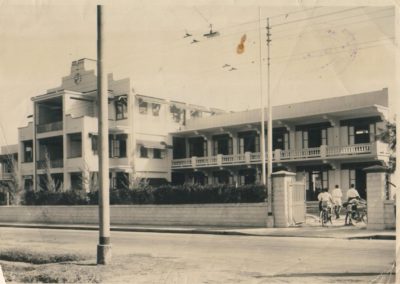 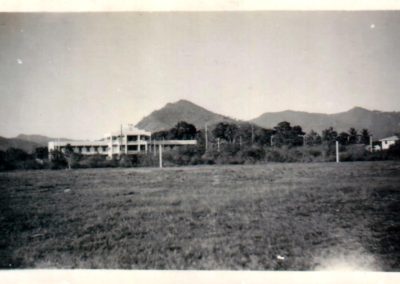 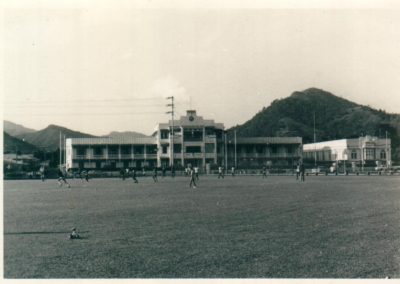 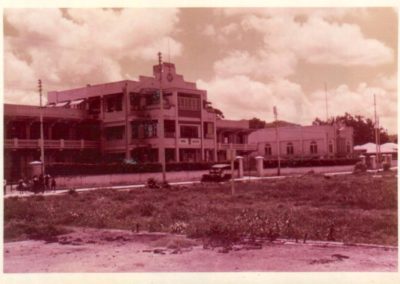 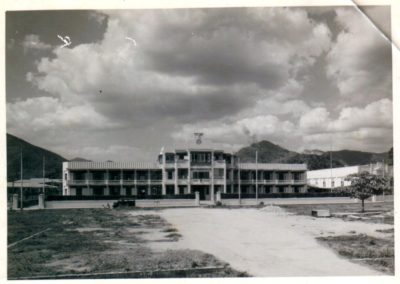 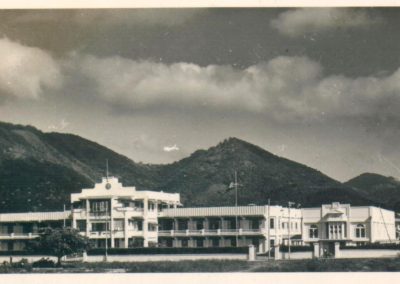 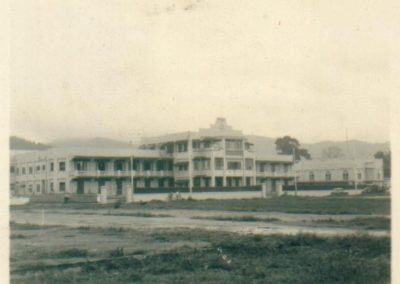 Fatima College was founded in January 1945 by the Holy Ghost Fathers responding to the need for Secondary school places in the Island. The school began in the churchyard of St. Theresa’s with Fr. Byrne as its first principal, Michael Mc Carthy (a Prefect) and Andy Cockburn (Later a Holy Ghost Father). Archbishop Ryan blessed the college in December of that year.

Fr. Byrne set the tone for the new College and so the communal atmosphere was present from the inception. He designed the Crest of the College and was also responsible for the building of the East and West blocks.  Many of the Administrative functions were similar to that of St. Mary’s College. In 1955, the baton was passed to Fr. Ryan. The enrolment at that time was 600 students with 25 members of staff. The staff at the time comprised of members of the Holy Ghost Fathers Congregation and Laymen. Mention must be made of the Prefects; scholastics of the Congregation who were preparing for the Priesthood. They taught at the College for three years and were in charge of the extracurricular activities.

Fr. Ryan was a dedicated principal who introduced Advance Level studies and many extra-curricular activities to the school’s timetable. He oversaw the acquisition of the playing field in 1961, the construction of the Pavilion in 1970, the first Sports Day in 1963 and the launch of the Fatima Old Boys’ Association in 1964 led by its first president Derek Johnson. The College celebrated its 25th Anniversary in 1970 with appropriate fanfare and pride and in 1972 Fr. Ryan retired and returned to Ireland.

Mr. Clive Pantin succeeded him. Mr. Pantin was a transformational leader, he abolished the 3X class (skipping from Forms 1 to 3) a streaming system which separated students according to their academic ability and introduced classes in alphabetical order.  Mr. Pantin saw the importance of recognizing the ability of all students; this was seen in the ease by which he called each student by name.  He built the Audio Visual Room, Library, Form 6 block in 1972 under the supervision of Fr. Farfan and the Language Lab in 1973. Also in 1973, Fatima saw its first female teachers; Ms. Daphne Heywood and Ms. Jeanette Zakour.  The House System (6 houses) and an Activity Period on a Wednesday afternoon were introduced in the late 1970s.  During this period, Fatima rose to the helm surpassing its rival in popularity. The College gained its First National scholarships in 1976. The Mucurapo School Community Project was another initiative of Mr. Pantin a collaboration with the new Schools on the block eventually having its content aired on TTT the first of its kind in the Country. During this period, Fatima was seen as the leader of Technology in Education.  Mr. Pantin resigned as principal to take part in the National Election of 1981 and was succeeded by Mr. Mervyn Moore.

Mr. Moore’s style of leadership was very different. His religious faith and concern for individuals was clearly apparent. During his tenure, he oversaw the extension of the AV Centre to include the Physics and Chemistry Labs and an additional Form 6 classroom.  In the 1980s, Fatima began to see the results of the renewed curriculum of the 1970s.  In 1982 we won four open scholarships and gained our first President’s Medal – Kieron James.  In 1984, Fatima won the Presidents’ medal again in Mathematics.  Mr. Moore was Principal for 18 years and retired in December 1999.

Anthony Garcia came to Fatima College with a wealth of experience, having served as a teacher in both the primary and secondary levels, as President of the Trinidad and Tobago Unified Teachers Association, as well as President of the Caribbean Union of Teachers. He accepted the mandate given to him by the Board of the Holy Ghost Fathers to improve the all-round development of Fatima College and he went about that task with diligence, but with compassion and wisdom.  Mr. Garcia’s first task was to share his vision of Fatima College as an institution where excellence abound, but his greatest wisdom was his realization that the fulfillment of his mandate was only possible with the active involvement of all the stakeholders.

He therefore engaged the Ministry of Education and the Teaching Service Commission to ensure that Deans and Heads of Departments were appointed. He encouraged teachers to improve themselves, both academically and professionally, thus strengthening the cadre of teachers available to the Fatima community.

Anthony Garcia saw the wisdom of working closely with the Old Boys’ Association and the Parents’ Support Group, two very important stakeholders of Fatima College. During his tenure, Fatima College, with the engagement of these two bodies, achieved significant improvements in the academic performance of students, with many achieving academic scholarships. Students excelled as well in the sporting areas of cricket, football, rugby, swimming and several cultural activities.

He believed in his staff of Fatima College, teachers as well as ancillary staff.  It was Anthony Garcia who coined the phrase: “Fatima Boys Are Good Boys” to describe the product of Fatima College. He spoke those words at every assembly, and on every available occasion. He instilled that belief in the boys and no one doubted that he spoke the truth.

Anthony Garcia retired from Fatima College in March 2009 and later served as Minister of Education.

Fr. Gregory Augustine took the helm in January 2009 building on the management style of Mr. Garcia.  Fr. Gregory was the first old boy to occupy this position of Principal. Having “grown up” in the College in the 1970s he was very aware of the strong community atmosphere of the College.  Fatima had always prided itself as being a well-rounded Institution and so he set about the task of ensuring that the curriculum reflected this holistic character. This philosophy was born out of the belief of the College motto by striving you conquer the possibilities for both students and educators must be boundless.

Academically, new subjects were introduced; Industrial Technology/Electrical, Music and Drama at CSEC level and Entrepreneurship and Environmental Studies were also introduced at CAPE level.  Heads of Department strengthened the coordination of their departments to ensure greater output and higher standards of performance. This resulted in all subjects achieving in the mid to high 90% pass rates at both CSEC and CAPE level examinations.

Co-curricular activities took greater focus as every student was required to enrol in a discipline, which was evaluated at the end of every term.  Cultural activities such as the carnival show was expanded to include traditional mas presentations, Stick fighting and Panorama.  The concert Gifts of Blue and Gold became a highlight at the end of November, a spectacular display of student talent.  The College band was formed, the House System revamped (four houses), the 5K was introduced and sporting activities were enhanced.  New disciplines included Dragon Boat, Track and Field, Table Tennis, Karate, Judo, Technology Club, Steelpan and The Mystical Rose Prayer Group, all given equal exposure in the school environment. Fatima saw the reintroduction of the Blazer for the senior school, clearly enhancing the students’ self-image.

Physically, the College has seen some major transformations; assemblies returned to the hall after the building of a mezzanine and the Library, Washrooms, Physics Lab, Biology Lab and Chapel were all refurbished. The Religion Room was converted to the Electrical Room and the AV Room was converted to the Music Room.  All rooms in the College were air-conditioned.  A new wing was built at the northern end of the College in 2014 which housed additional form 6 classrooms, Art, Drama, Technical Drawing and the FOBA office.  Smart boards were placed in every classroom reflecting 21st century learning.  On the Playing Field the basketball and Small Goal Courts were upgraded in 2019 and the Pavilion now houses a fully equipped gym.

It is no surprise that all this had been made possible by the harmonious relationship which exists amongst the various bodies of the college; students, teachers, parents and old boys.

Fatima in its 75th year can be proud of a strong self-image enabling it to answer the call of the next 75 years and beyond.