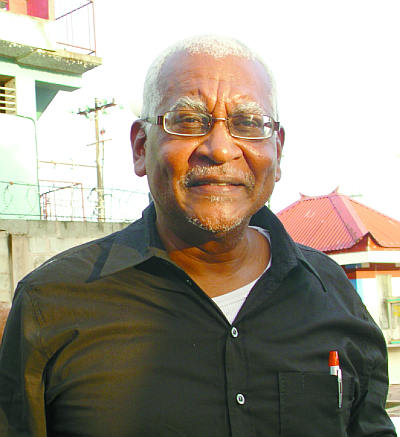 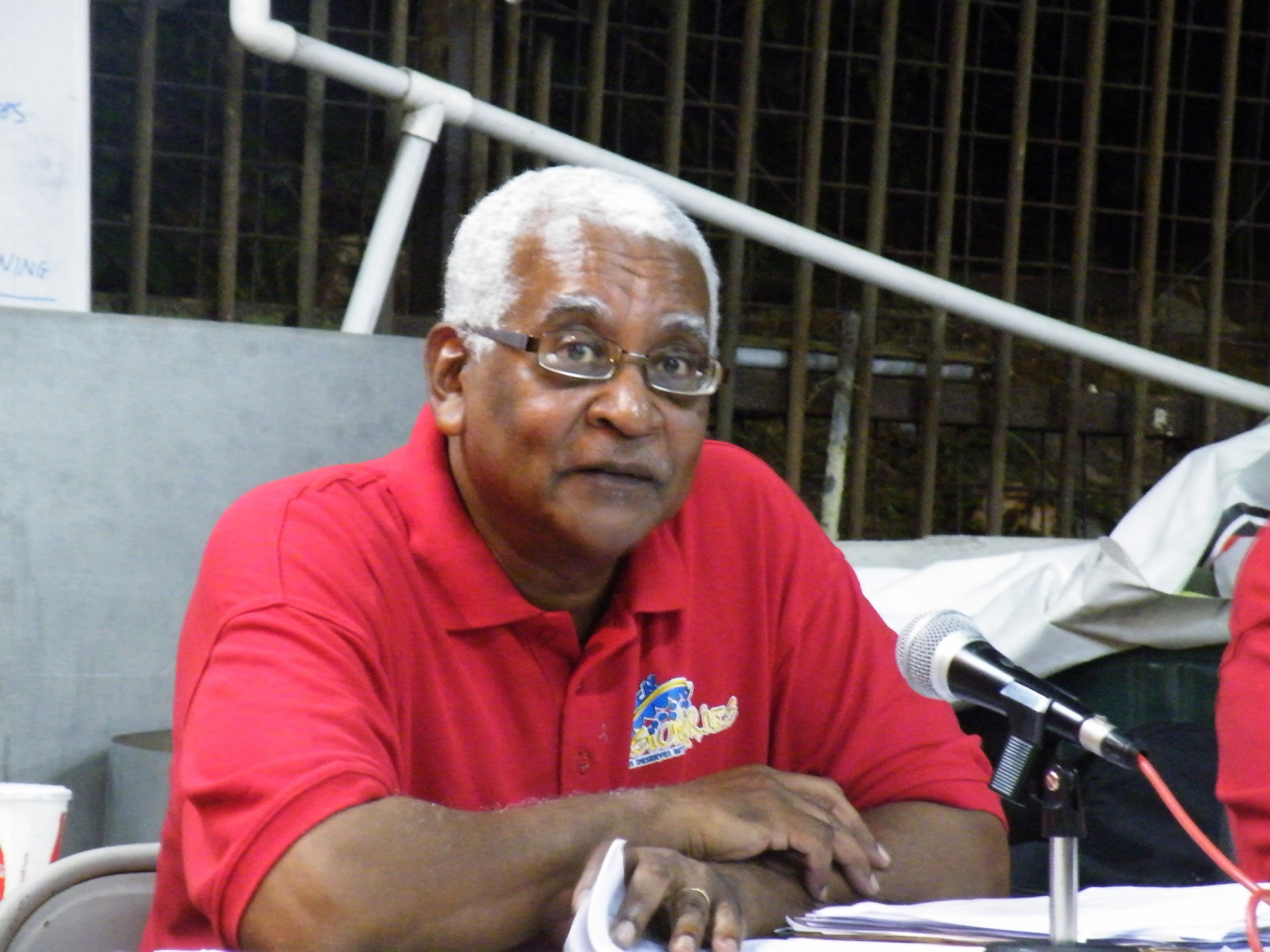 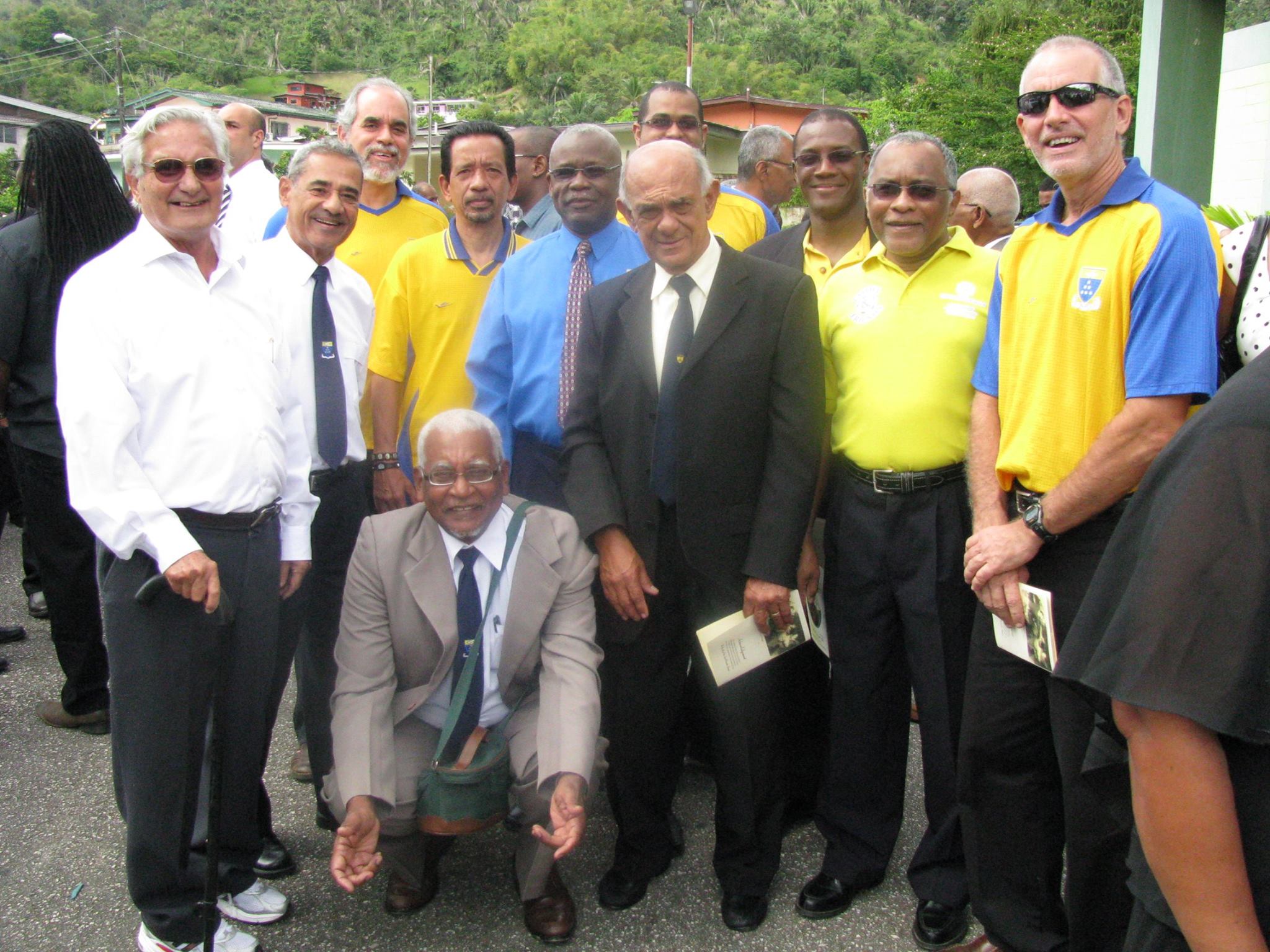 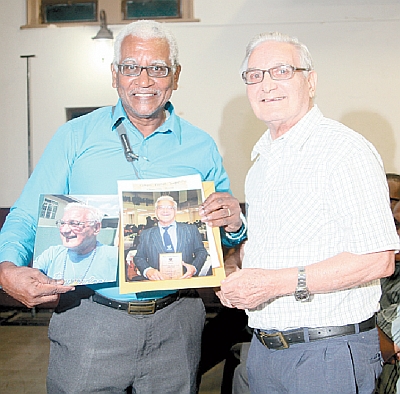 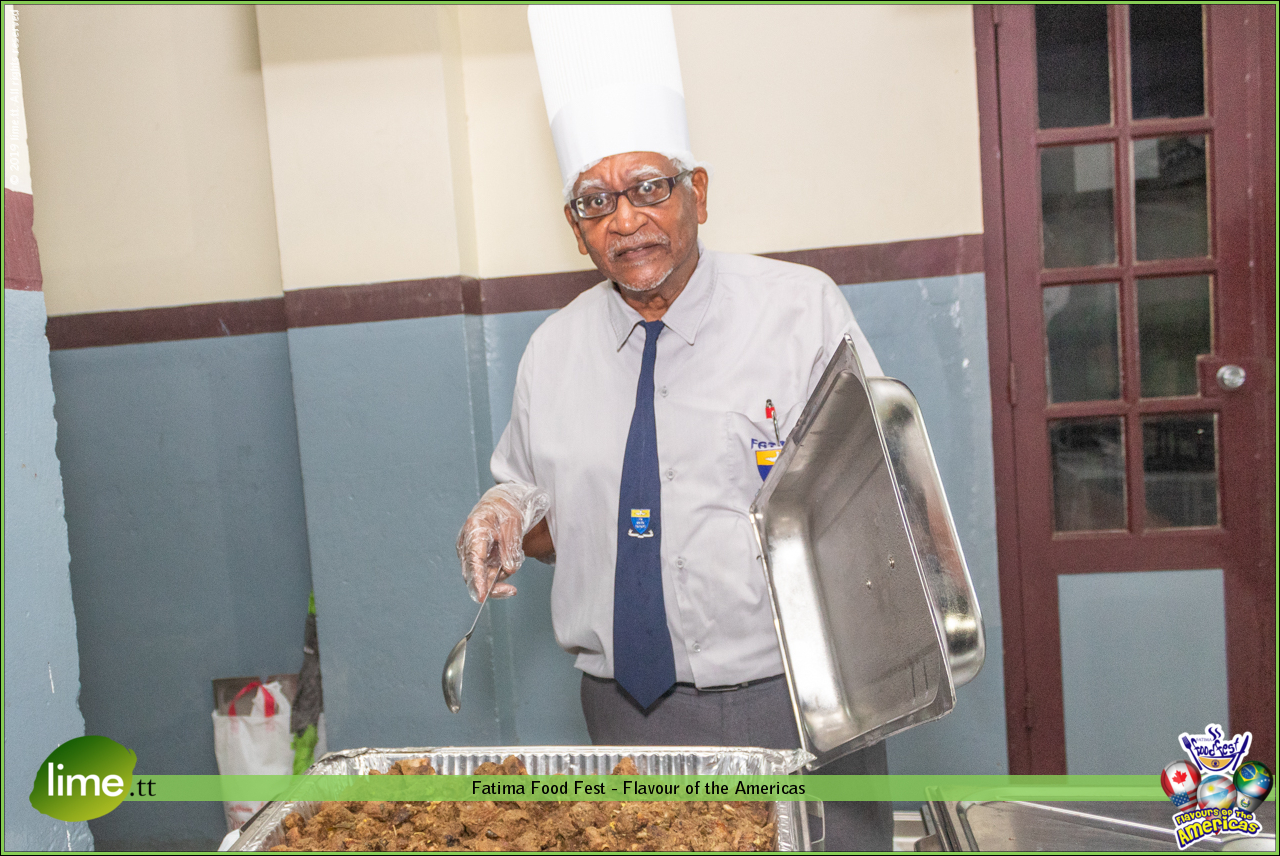 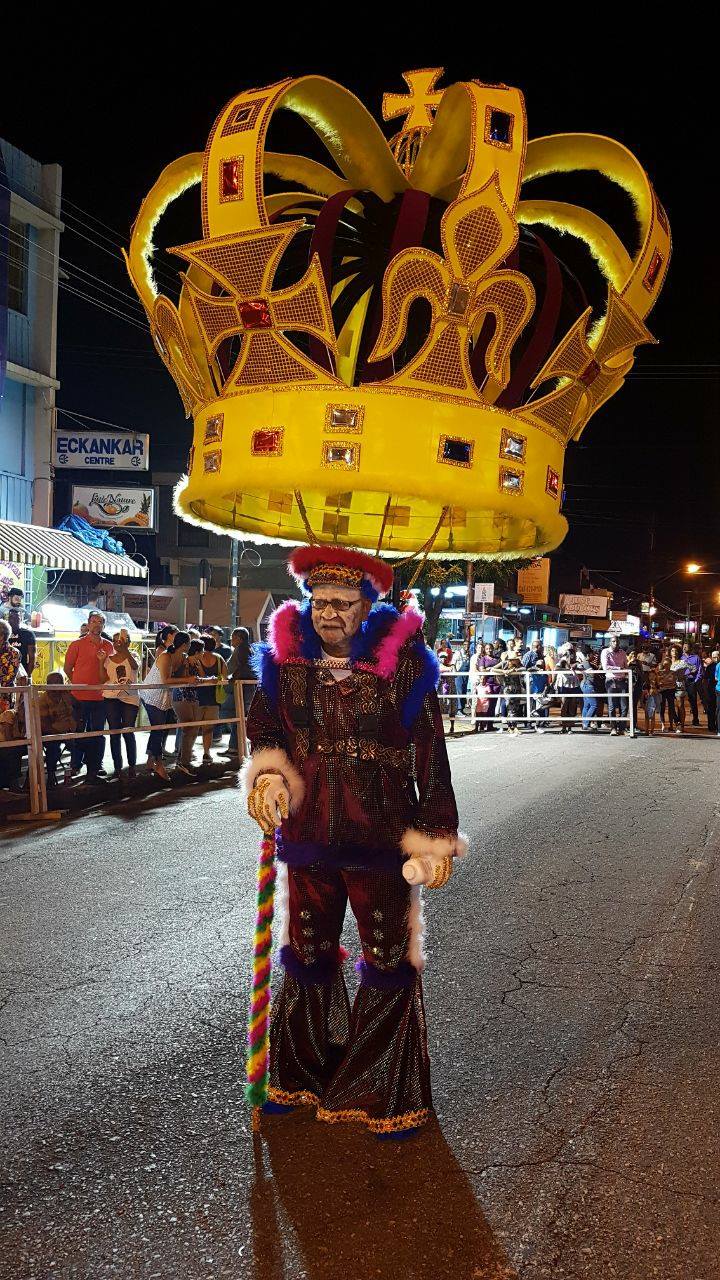 Keith portrays The King, for the band ‘Masters of the Art’, 2018 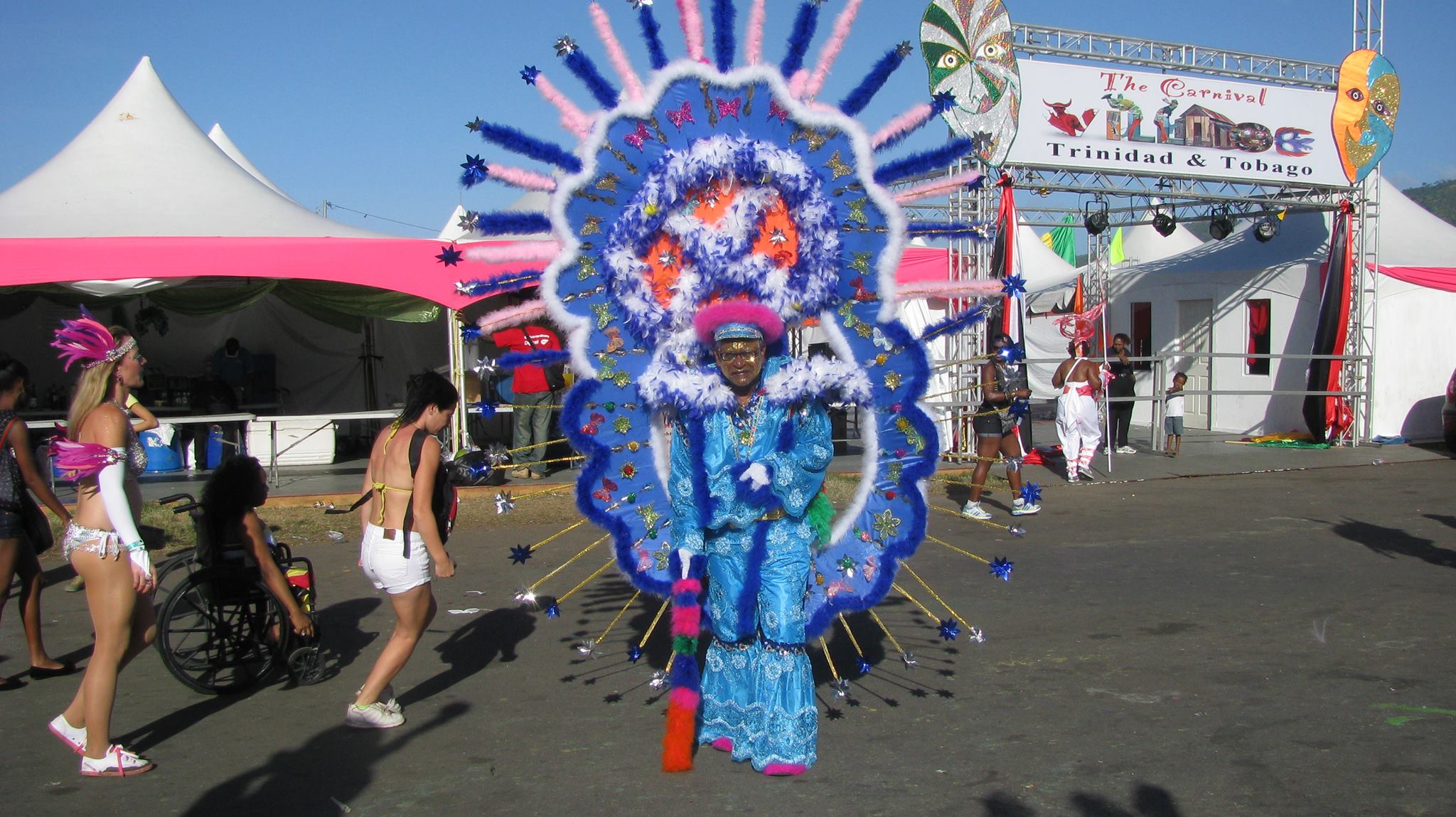 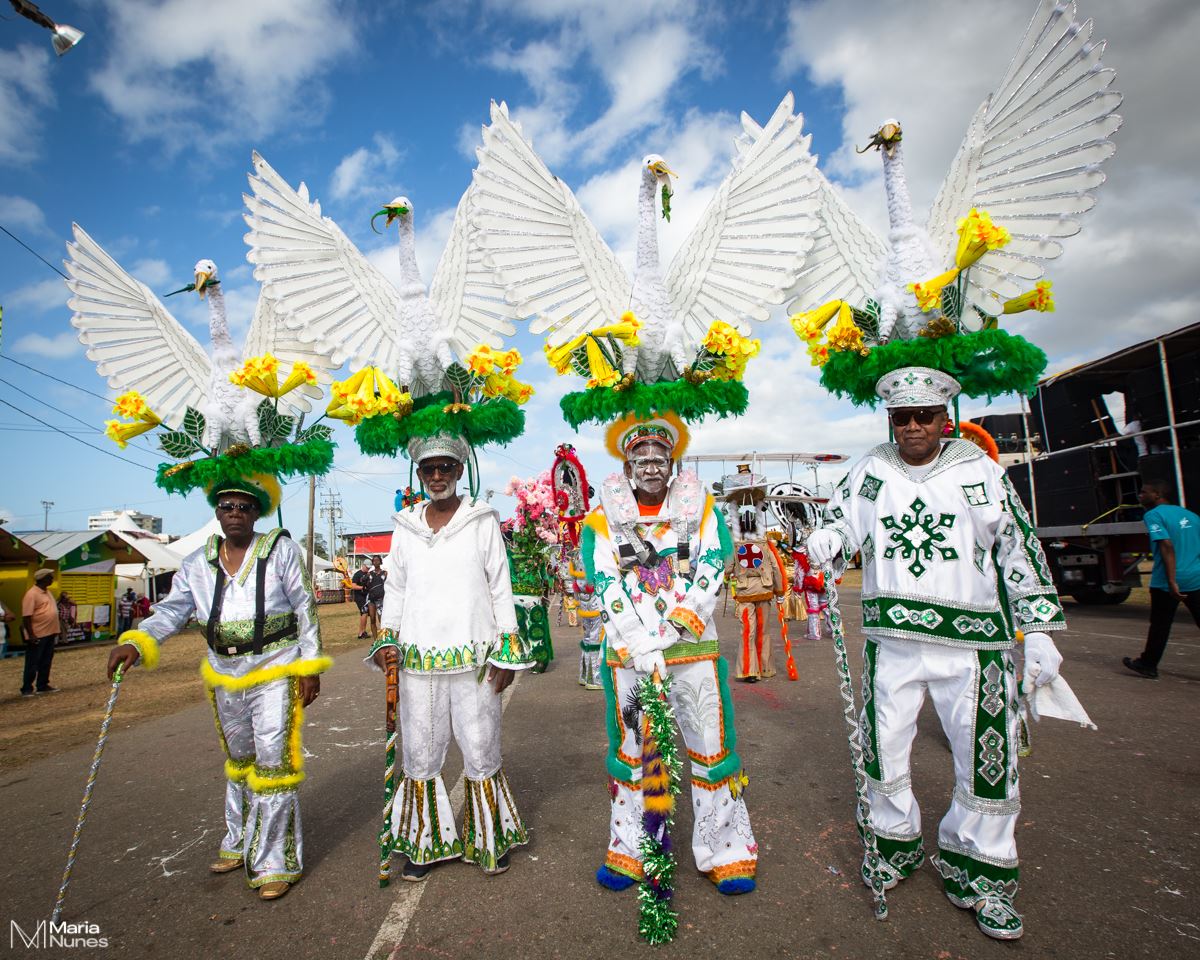 Q. Describe the culture of the school in your time.

A. Well, we were considered the ‘smaller brother’ to St. Mary’s College, and we remained in the CIC shadow for many years. St. Mary ‘s College was founded in 1863 by the Holy Ghost Fathers, who founded Our Lady of Fatima College, consecrated in December 1945.  You may recall that Fatima Boys had to do their H.C. (Higher Certificate) exams at St. Mary’s College as we then had no Form VI classes.  Fatima College was a simple, disciplined institution when I entered. (I continue to wear my blue shirt and khaki pants to the school!) The dress uniform was a white shirt, serge pants and the stripped blue and yellow tie. The country at the time was approaching Independence, crime was not an issue, and we were in an age of innocence.  There were many priests from Ireland at the time, led by Fr. Ryan, the “Raj”.  Fitzwilliam, Anthony Pantin, and Farfan were locals. There were also four Prefects (who I called ‘apprentice priests’) also from Ireland. Most of us either rode, travelled by train, bus, or walked to school.  There were two ‘bicycle-sheds’ located where the Audio-Visual Lab is at present. Boys participated in football, cricket, basketball, lawn-tennis, Cadets, Scouts, Camera Club, Chess Club, Night study, Legion of Mary, Fr. Corcoran’s St. Dominic Savio Choir, and The Pioneers (this last one was where you took a temporary or permanent vow not to drink alcohol… but many of us fell by the wayside), and of course Detention.  On Friday, you handed up your Judgment Book where each subject would be marked, 10 being the highest mark.

If you did not see your Judgment Book on your desk on Monday, it would mean you either got three 6’s or a the initial ‘C’ (Conduct mark) added to a mark (e.g. 4C, 5C, 6C). You collected your Judgment Book from the Dean, along with at least four lashes with a strap! If, however, you received three 10’s, you would be given a Testimonial.

Q. How long were you on the FOBA committee before you ran for President?

A. Well FOBA was founded in 1966. When I left in 1968, I was aware of an ‘Old Boys’ Association. I knew about it because the choir of which I was a member sang in the Old Boys get together in the Hall. I also knew many ‘old boys’ who were members—including my mother-in-law’s brother, Vernon Mangatal, one of the founders of the Association. I knew many ‘old boys’ who were involved, and I attended the Old Boys’ reunions.

A. In the early days after the ‘old Guard’ had left, they were followed by the New Generation. Our meetings were every Monday, then changed to every Tuesday. We met in the Principal’s office for approximately an hour. Presidents were appointed for a specific period as there were no elections then. From a young student, I developed a love for the College and felt that I would do anything possible do to assist my alma mater.

A. At the time I was President, Men Who Could Cook and the All-Inclusive Parties did not exist, so there were no major fund-raising ventures. We would support the College however in any venture it would have had, for instance the Annual Mayfair, Bingos, etc.  Somewhere along the time-line, a Club was formed for ‘old boys’ to make a monthly contribution.  My aim as President was to get more ‘old boys’ involved with the organization so that it could have been strengthened, and it would have attracted ‘old boys’ with various skillsets.

A. Trying to attract a larger, more diversified number of ‘old boys’, and the lack of financial resources.

Q. What were you most proud of during your tenure as President?.

A. I was pleased that I could keep my focus and was able to get ‘old boys’ together through sport. I initiated and organized the After Walkathon football tournaments where ‘old boys’, teachers, Form 6’ers, would participate in a day of fun. I organized matches with other schools: St. Benedict’s, Naparima, QRC, CIC, as well as other ‘old boys’ teams and some non-school teams.  I also staged the first Blue and Gold Fete, at the Lion’s Club venue. In spite of limited resources, we still assisted students from our own pockets––purchasing togs, or filling any other need within our means.

A. It brought me closer to my school and increased my love and dedication to Fatima College.

A. First, Father Ryan, second Principal of the College; and second Clive Pantin.

I started as a Teller, worked my way up to the Bank’s Audit Department, and finally to Manager-Retail, where I developed/conducted training sessions for the Bank’s Retail Lending personnel, imparting the knowledge I had gained over the years. For many years, Scotiabank assisted unsponsored Steelbands financially, and I was very much involved in this Bank initiative until I retired in 2013. I was also very active in reviving the Bank’s Sport Club, and served two terms as President, representing the Bank at football.

I am the eldest of seven, my younger brother Roger attended Fatima College, so did my son Maurice and my eldest grandson, Abraham (deceased).  Married for the past 46 years, to Deanne the daughter of an ‘old boy’(!), I am the proud father of four and grandfather also of four.

A. Since retirement I have been very busy managing my Steelband, St. James Tripolians Steel Orchestra; as well as being: Secretary/Treasurer of my ’Mas Band, Belmont Exotic Stylish Sailors; Executive Member of Pan Trinbago since October 2018; Director of Panvesco; Board of Directors of Credo Foundation for Justice (run by the Holy Faith Sisters); Co-ordinator of the Regional Carnival Committee’s Sub-Committee Traditional ’Mas.

As to my hobbies and free time activities, I archive newspaper clippings which highlight the Steelpan, ’Mas, Calypso, local international events, and Fatima College. So I have to read all three newspapers daily! I collect all books on local culture, anything local. I also collect Steelpan music, especially Panorama performances,  and old Calypsoes.

A. Yes I have maintained close contact with many of my classmates, local and international. I attend events hosted by the Decade II and Decade III groups, which are held quarterly.

A. Fatima College has progressed from its foundation in 1944 to present. Proudly, we are celebrating our 75th Anniversary next December! We were the first school to introduce computers and also teach the use of them; also the first with an Audio-Visual Centre, Smart Boards, etc. Clive Pantin was a pioneer in introducing technical drawing and similar subjects at the College. We have staged some outstanding “Men Who Can Cook” events, and All-Inclusive fetes.  We have produced world champions in various spheres, and students who have excelled nationally and internationally—proof to be found in our line-up of ‘old boys’ inducted into our Hall of Achievement.  And we continue to turn out well-rounded, responsible citizens. To quote from Principal Fr Gregory’s speech at this year’s Prize-giving Function: “Fatima College is a feeding-ground for excellence.” He went on to say: “Fatima is an institution to be reckoned with in the world today, and with the help of God we continue to excel”.

A. I would seek to continue the great work done by previous Presidents and Executive members, and build on their successes. I’d work to get more ‘old boys’ involved in the Association, to attend functions, and to participate in elections so that we may have a heftier input from our graduates.

Q.  You are the official FOBA Historian. Tell us about how you ended up in that position.

A. I was appointed when Stafford Yorke was President. It was common knowledge that I was working at archiving as much data on Fatima College as possible, so I accepted.

Q. In all your years of covering Fatima/FOBA history, what incidents/stories stand out the most?

A. I’m thinking: the 1965 Intercol victories, Lara’s and Ato’s achievements, the death of Clive Pantin.

A. When I entered Fatima College in January 1962, St Mary’s and QRC were the preferred boys’ schools.  The many boys who attended Fatima then came from homes of modest means. Trinidad was not yet independent, there were no computers, TV stations, only two national radio stations, Radio Guardian and Radio Trinidad, and a third Station—the rental Rediffusion service; also, WVDI a local US Armed Forces radio station located at the US Naval Base at Chaguaramas.  Very few homes had telephones.  Today, Fatima has pioneered in ‘school technology’ with our computers, audio-visual studies, we now Smart Boards in classrooms, and a Hall of Fame that allows sourcing from an interactive screen. There are no more ‘bicycle-sheds’ as no one rides to school…in most cases they’re dropped to school by parents, some even drive their own cars!

Q. You are very active in many St. James activities (Hosay, We Beat, etc). Did Fatima’s location contribute to the strong cultural ties you have to St James?

A. Yes Fatima College would have contributed to my cultural ties as many students in my time brought with them their many, varied backgrounds––involved in Pan, ’Mas, Hosay, and other cultural activities.

A. Needless to say, I have no regrets for having attended Fatima College. I received a priceless all-round education, in the form of a balanced mix of training in areas academic, spiritual, social, and sports…an exposure geared to grooming conscientious boy-students into becoming contributing men-citizens.  We cannot thank enough the priests of the Holy Ghost Fathers Order, including those young men who left their home in Ireland to come to prepare the young men of our fledgling Nation.  Thanks to Father Byrne, founder and first Principal of Fatima, for his foresight and determination to gift our country with Fatima College, even in the face of what must have been trying times. 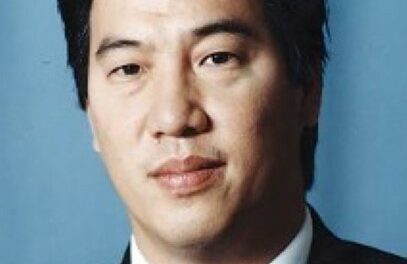 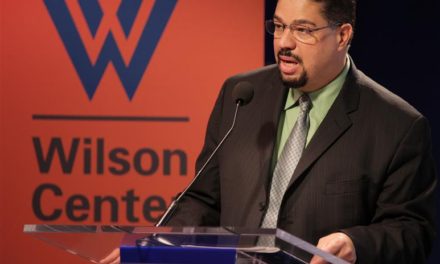 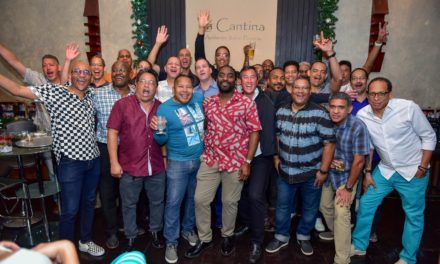