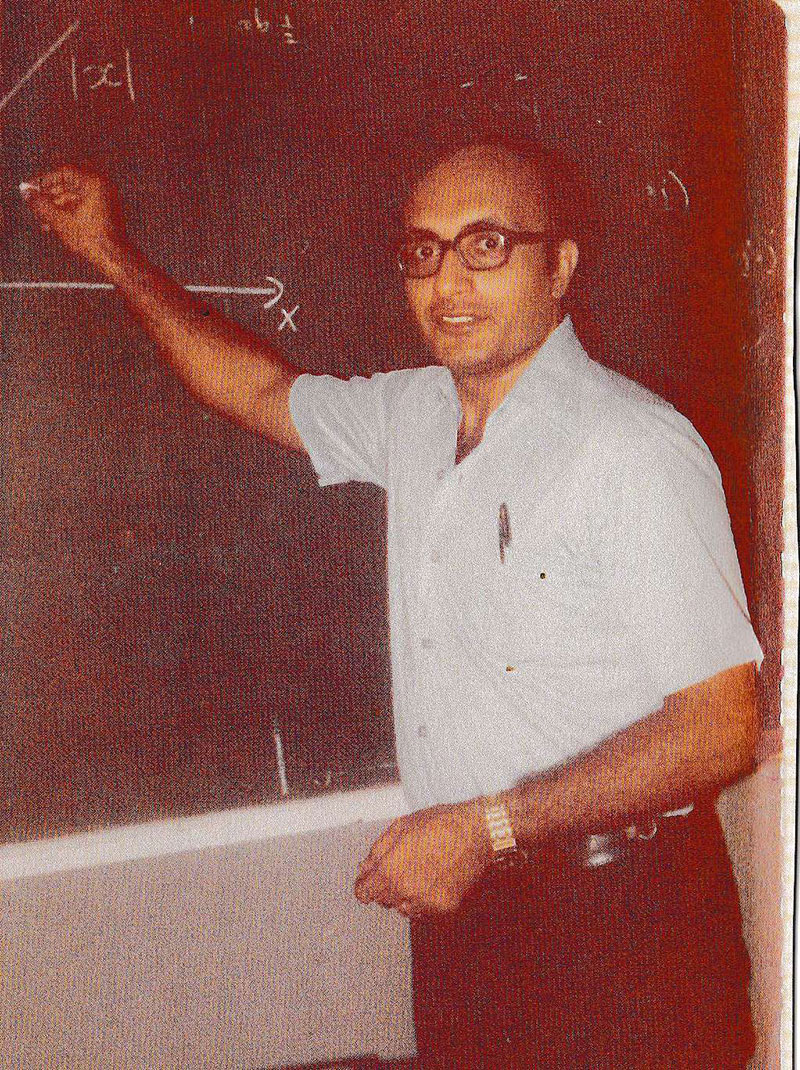 He was Dean of Forms One and Two from 1980 to 1982 and the Dean of Form 6 for the two years before that. He also served as Vice-Principal from 1983 to 1988. He taught Mathematics at ‘O’ Level and at ‘A’ Level he taught Additional Mathematics, Further Mathematics and at times, Advanced Level Physics.

October 1971: on my first day at Fatima College, during a class with Sixth Form mathematicians, we heard a screeching of tyres and revs of an engine. Being concerned, I was ready to run out to see what had happened. The students laughingly stopped me and informed that it was only Father Ryan driving back from his Parish duties. You could not make it up-it happened! So it started with me being the Head of Mathematics and the Senior Physics Teacher. I enjoyed the year in the company of disciplined, helpful and keen–to–learn students and the wonderfully friendly and hard working staff under the efficient, firm, no nonsense but kind leadership of Mr. Clive Pantin. During that year an offer from the U.W.I. St. Augustine to lecture in Mathematics proved too tempting to turn down and I went on to achieve my ambition of lecturing at a university and of being involved in research.

After almost four years, a short talk with Mr. Pantin following one of his many Public Lectures on evolving educational trends and systems in Trinidad and Tobago, I was lured back to being a part of exciting developments envisaged at Fatima College and of steering the Maths Dept. to aim for the highest honours of obtaining the National Scholarships. Thus started the period of our students winning a fair proportion of the annual Mathematics, Science and Additional Scholarships Of course, the credit is shared by the dedicated staff who gave of their time and knowledge freely to all students day in and day out.

But not all was work: I remember the staff vs. students Wind ball Cricket matches which the staff frequently lost even though we had the dynamic Captain in Mr. Ramdass, our fast bowlers Mr. Achille and Mr. Garcia, our excellent fielders Mrs.Clerk, Mrs. Jenkins and sometimes Mrs. Humphrey, the steady batsmen Mr. C.John, Mr. Roach, Mrs. Jenkins and Mr. Sunderji (cyar leave mehself nah!). I am sure my record of bowling out Brian Lara twice in a match still stands

Time passed and eventually Mr. Moore became the Principal and I was appointed the Vice Principal. The college continued to enhance its facilities: the new Library and Science building soon after the D.T. and Art block, the most appreciated Cafeteria annex and the Computing Faculty all came into being through the generosity of donors and the fund raising efforts of the students and the staff.

I remember, with undiminished pride, the Prize Giving Days—the tremendous energy displayed by Mr. Romero in helping me, the Sports Days ( every year Mr. Pouchet would pin me down as a scorer), The Parang Afternoon around Christmas with Ms Hubbard at one end of the 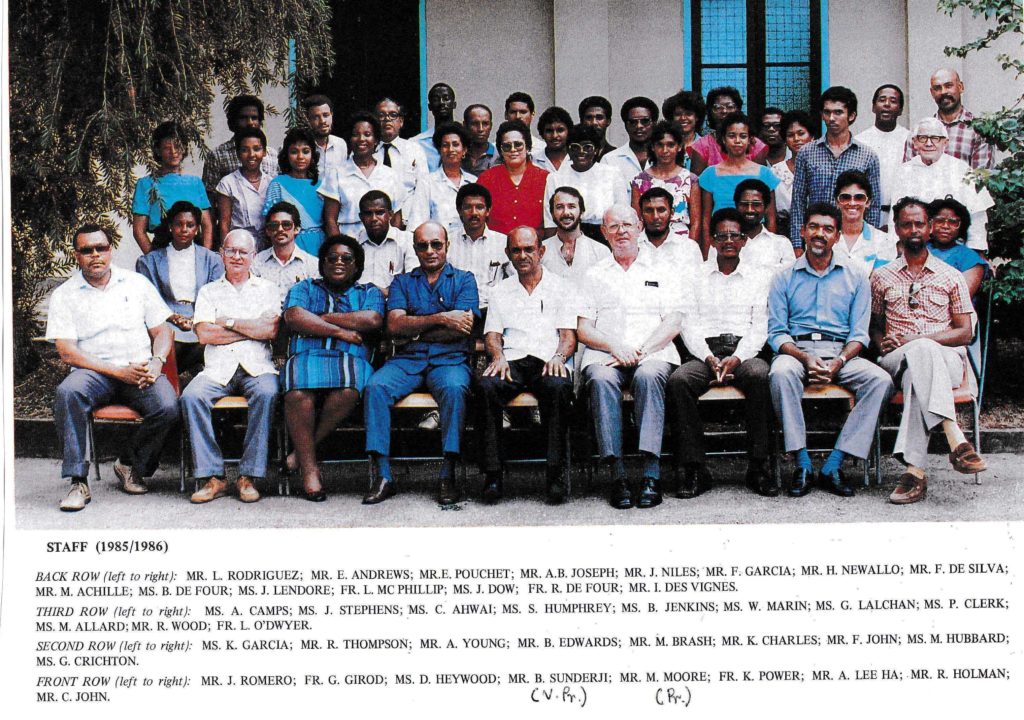 Staff group, the Calypso Competitions with the contributions from Mr. G. Roach of hilarious staff-mocking themes. The Community Service events organised by the senior students, the Unique Joint Last Day activities for Sixth Formers of Fatima College and Holy Name Convent School —-no trouble, no complaints from the public and admirable co operation between the staff and students from both the schools with Mr. H. Newallo as our liaising member. I sincerely hope these traditions and innovating spirit continue!

How can I forget the day when a student jumped the full ten metres from the top of the retaining wall into the dry ravine behind the library or the time I promised a student to cancel his lunch time detention as soon as he finished rearranging the scrambled Rubik Cube I gave him; taking it from me and holding it behind his back while looking amusingly at me he presented the fully solved cube to me in under a minute! To this day, I often lie awake at night trying to figure out how he did that.

I left Fatima College to live in England in 1988. Below are some photos for anyone who wants to walk down the memory lane.

One thing must be mentioned: I was the first ever (Ismaili) Muslim to be appointed in a Catholic institution in an administrative position. I enjoyed the respect and friendship of the priests and the lay staff and always reciprocated the same reverence. Attending Church Services with students never raised a second thought in my mind; God was (and will be) first in all our plans. The various paths we follow to reach the same goal never were a cause for confrontation at Fatima College. Humility, the spirit of universal brotherhood, generosity and integrity prevailed. How I wish and pray that the turmoil of the present subsides to produce a peaceful life for thousands suffering from ignorant fanaticism of a devious minority who have no just cause to drag in their evil machinations the just and graceful nature of our religions.

To all my past students and colleagues I send my best wishes for unity, trust and understanding in your lives. and extend an open invitation to contact and visit me if ever you pass this way—just give me a call on +44 0208 890 7936. 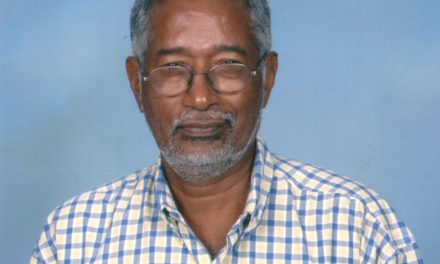 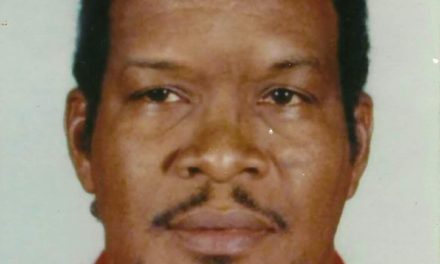