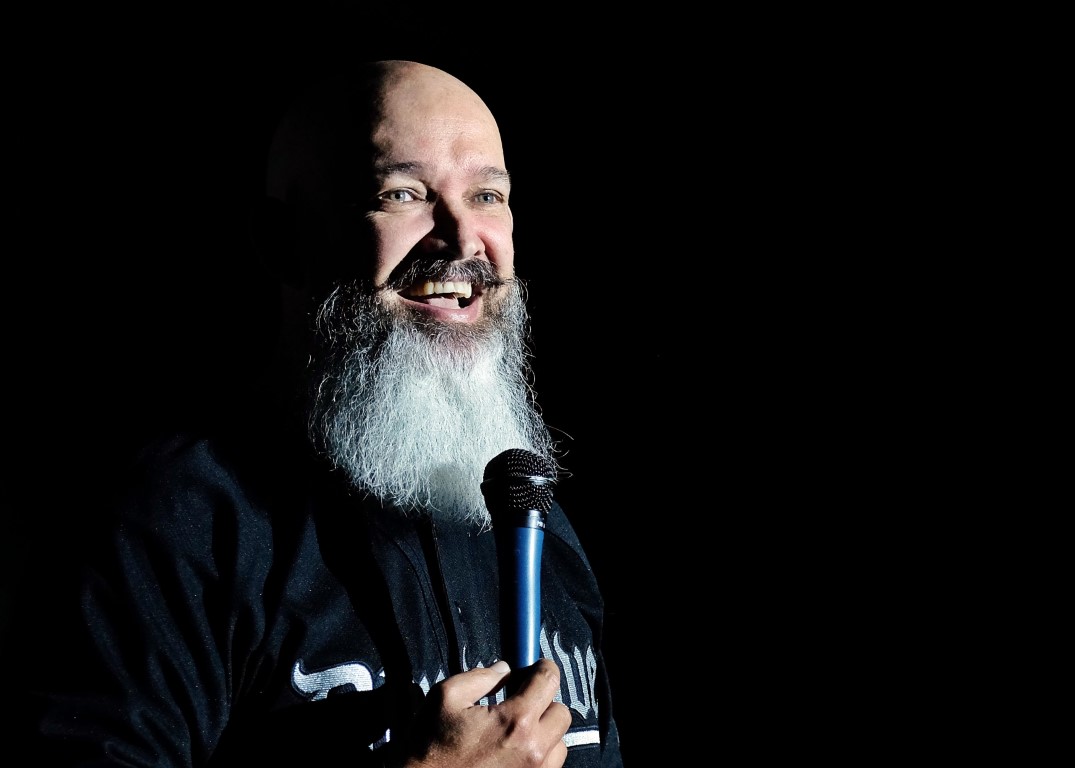 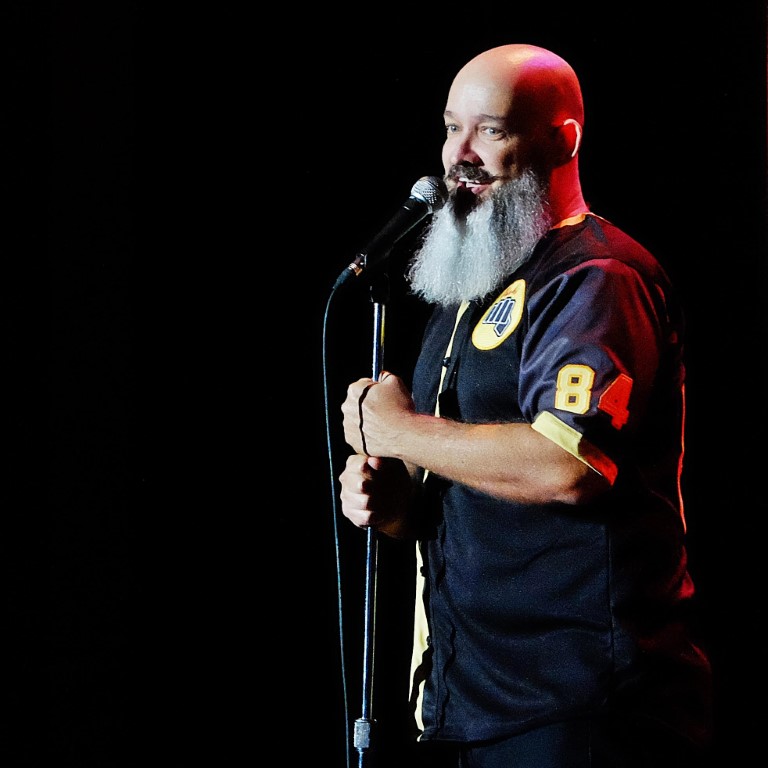 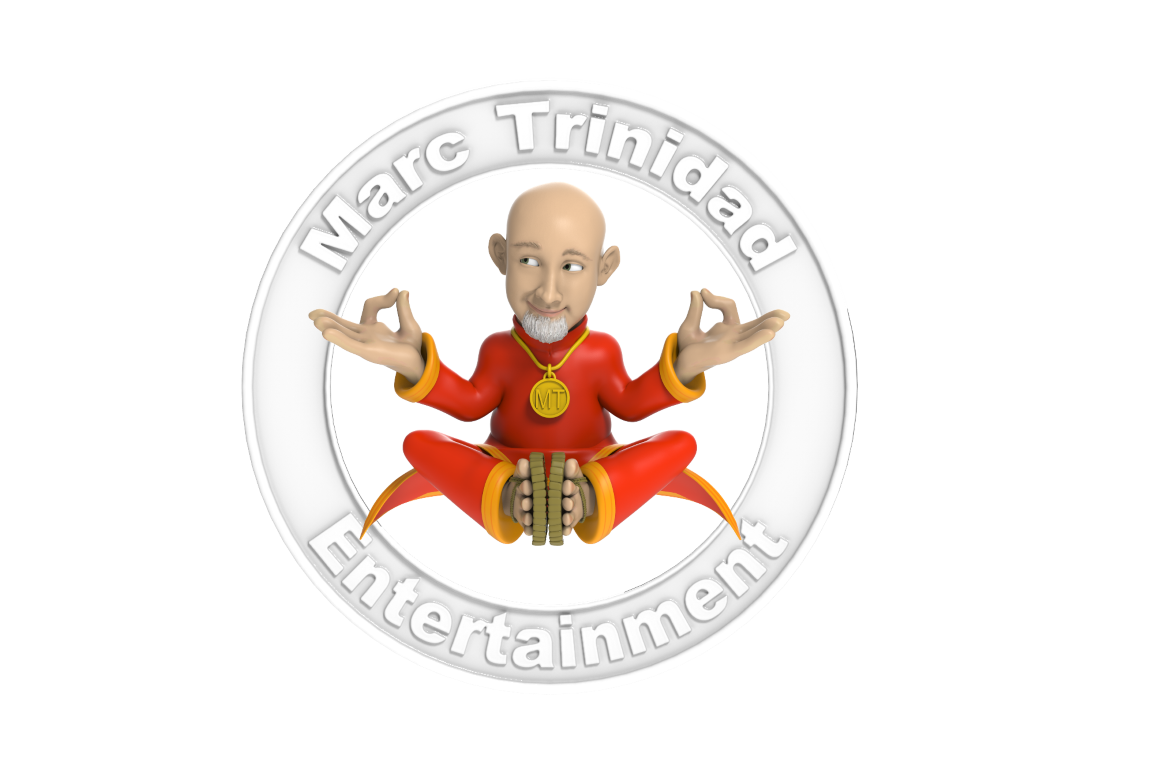 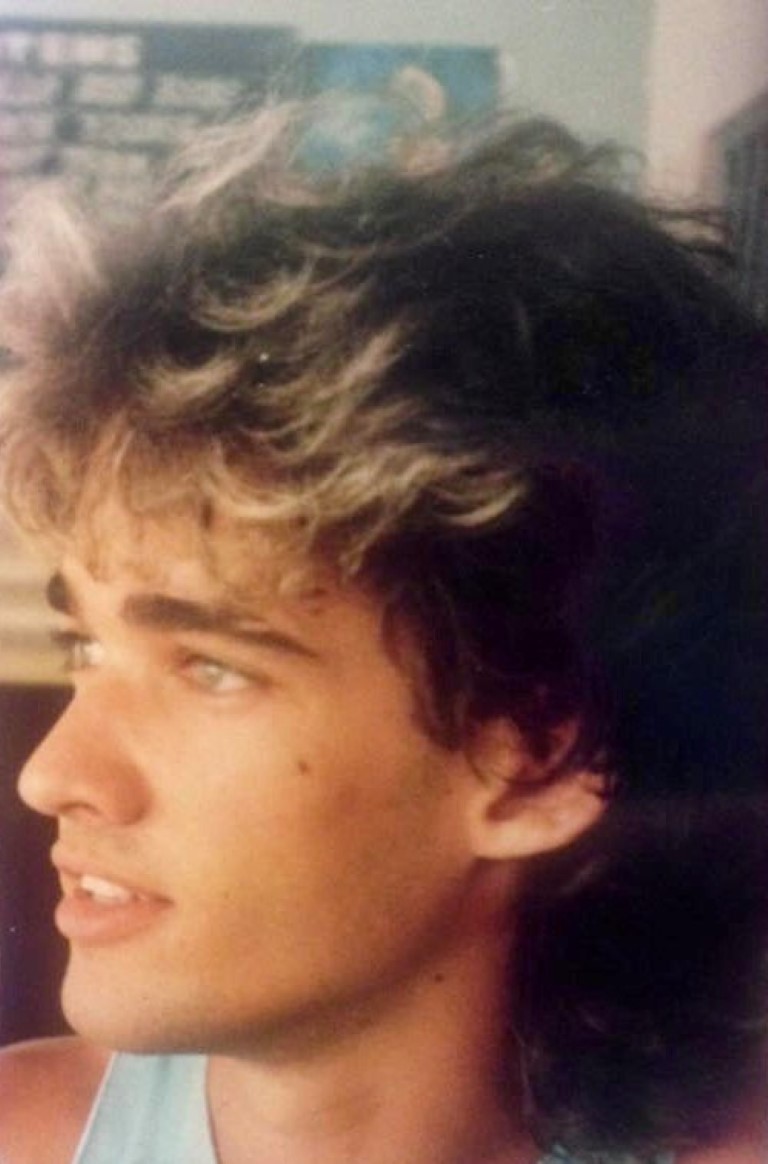 Marc Trinidad (Class of 1985) lives in Canada and has been a stand-up comedian for 25+ years.

He has worked the stage with social media sensation Majah Hype, Kenny Robinson (considered the Godfather of Comedy in Canada), Dave Chapelle and Chris Rock. He’s created history as the first Canadian to have appeared on BET ComicView and was featured on the Comedy Network. He is also in rotation on Sirius XM and has toured the Netherlands, the UK, the US and the Caribbean.

As far as I remember, Fatima was the only choice in my house. My older brother was there and it was probably easier for my parents to drop us both to one school. I just liked the school colours. Reminded me of my favourite football team, Brazil.

Q, How was your experience at Fatima?

Let’s just say I wasn’t the best student in any of my classes. So, I got to know each Dean and their methods of punishment really well. For some reason though, I was good at art. It may be the constant doodling that sent me to the Dean’s office. Vicious cycle.

Q. Who was your favourite teacher(s) and which teacher did you give the most trouble?

Honestly, I give thanks for all teachers. They have so little support for such an immense responsibility. I learned very late in life that I have ADHD. I understand now why that made me a terrible student for a rigid scholastic approach, which was the norm at the time. My brain didn’t fit that mould well. But it did make me quite artistic. Did I already mention that?  It also made me good at my technical drawing classes. I think I mentioned that too.

Ohhhh…Ms Zakour was unforgettable. I don’t think it was her French teaching abilities though. I get distracted quickly. She made me focus.

Q. What is the worst mischief you got up to at Fatima?

Unfortunately, mischief and the criminal code are bonded. To let you know that, I’d need to know what are the laws presently on Statute of Limitations? I may need to call Keith Scotland. He and I are due for a rematch of the 1982 Doubles Eating contest.

I live in Canada now and sadly, I haven’t kept up with those connections. I blame global warming. Or bad internet connections. (As long as it’s not my fault, is what I’m saying.)

Q. What were your aspirations after leaving Fatima? How did you end up in the comedy arena?

I got exactly what I wanted. To leave school.

I didn’t have any other ambitions than stopping my continuous trek to a Dean’s office. (Did you know they soaked those corporal punishment leather straps in brine? Yah, those Deans were salty ole boys, bro.)

I blame my desire for money and my mother’s boss for my entry into comedy.

My mom worked for the company that owned the KFC franchise. They needed a person to be their costumed mascot, Kentucky JOJO. He asked my mom “Would Marc do it? He’s a natural ass.” And the door was opened and the angels sang.

Q. You left Trinidad for Canada because there were no Comedy clubs in Trinidad and you wanted to further your comedy education. Why Canada?

They said yes. Trust me, I was shocked too. Obviously, they didn’t ask Father Pantin for a reference.

My wife worked at Air Canada at the time, so we frequently were in and out of the frozen tundra. It was just easy for her to walk right into a job. I’m still satisfied with that choice. (The wife. Not the job. She’s a dime and a half plus vat.)

Q. What was the origin of “Marc Trinidad”?

The godfather of black comedy in Canada gave me my name. I think he has an issue with names that are hard to pronounce. “Marc Trinidad!” was easy for him to bring up on stage. And that’s how it’s been ever since. And really, who dares question a legend? Would you tell Brian Lara who to pick as an opening bat? You see my point.

Q. Tell us a couple of your most interesting/outrageous stories from your travels.

Bars that had chicken-wire around the stage because patrons threw beer bottles! Hotel towels with skid marks on them! Performing for nobody but a bartender because it’s part of the liquor license to have live entertainment! Any of those outrageous yet?

The point I’m making is: the attraction or addiction (however you look at it) to be onstage is so strong, that comedians endure special levels of ridicule, racism, sexism and disrespect just to get hit with that small kick of dopamine and adrenaline that we get when we hear laughter!

Q. How would you describe your brand of comedy?

Confrontational with a dash of mischief.

Q. What qualities and values did you take from Fatima that helped you in your career?

The value of not sticking around when you don’t like someone, something or some situation. No, really. That has served me well over the years.

But I know you want a more traditional response.

I certainly do recognize and recommend a foundation of a good education. Education is important. I’ll also point out that education isn’t exclusively kept within four walls and a roof. It’s everywhere. Having said that, I do think we, as parents, must act more like gardeners. Because a gardener knows that different plants bloom at different times. Children are the same. Some may not bear fruit during the school years.

It can come later in life. They are just establishing their roots first. Nurture and guide them regardless. That’s your only job.

Q. You have shared the stage with Chris Rock and Dave Chapelle. Tell us about those experiences.

Toronto is commonly referred to as ‘Hollywood North’. It’s often used by film studios, to replace major US cities but at a much cheaper rate to film at. It’s because of that reason, major-level comedians find themselves in our comedy clubs.

Of course, I am and was a big fan of many of them. Including Dave and Chris. Both of whom, were humble and giving of their time and knowledge to us, the local boys.

Q. What is the highlight of your career thus far?

I know some would list accomplishments of fame or fortune but I’m a different kinda guy.

I did a show in London, Ontario, at a local comedy club. When I got offstage, I had a couple approach me to tell me how much they enjoyed my set. I was taken aback by their approach for some reason. They felt it too.

So they explained to me that they were in town at the Sick Kids Hospital because their child was terminally ill and they randomly walked into the club to get an emotional boost. For the 45 minutes I was onstage, they said they literally forgot why they were there and laughed to tears. That’s the best thing about my job, and the worst. Because I gave them some necessary joy but it was in London, Ontario.

Q. The Covid pandemic has obviously had a drastic impact on the entertainment industry. How have you adapted and what have you been doing to prepare for your eventual return to the stage?

Ohhh…you want to see how the sausage is made, huh?

I think anyone who saw their income hit zero for a year and a half would see the need to reassess their lifestyle and make accommodations. So have I.

So, during my societally forced vacation, I’ve taken the time to focus on learning how to switch my skills into the digital format. Hopefully, I’ll begin to appeal to a broader audience (and create income from) the World Wide Web.

Q. Are there any comedians that you would love to share the stage with? Any stage venue still on your wish list?

Not really. I’m more into the journey of making myself better. It’s all about the art form for me.

I am a huge advocate of the belief that we only live once. So there isn’t much you can say I don’t want to experience. The world, everything and everyone in it are exciting. Why wouldn’t you want to see it or know it all. (I’m not getting a do-over.)

So yes, I’d like for my comedy to take me to countries across the globe and to be heard worldwide. I’d like to meet more people, read more books, tell more stories and understand the human experience better.

Q. As restrictions have eased up and live performances are finally back on the schedule, how has that been?

The shutdowns have obviously affected us all. And those of us in the entertainment industry were not sheltered in any way. We couldn’t ’work from home’ or fall back on traditional government assistance like unemployment income. We all suffered financially as well as psychologically. Having said that, after 18 months of finding creative ways to get things done (perhaps in the gig economy, a sugar momma/daddy or OnlyFans. Hey, I don’t judge.) my people have emerged and are thankfully back performing. (As in their original artform. Not the other artforms they did during the pandemic. Though I heard some were lucrative.)

Q. Tell us about your family. Have any of your children inherited your funny bone?

As a parent, my goal is to help my kids to discover their individual passions. I know they learn from example, so obviously due to proximity they’re probably going to pickup on my and my wife’s idiosyncrasies. But to live a glorious and fulfilling life, you need to blaze the trail you wish to walk on. Not follow another’s path. So, I help and counsel but I don’t dictate their decisions. They must make up their own minds.

Q. What do you miss the most about Trinidad?

I really can say I miss the ‘drop by’ nature of life in Trinidad. Canada is so huge. You can drive for a week and still not hit a coastline. In Trinidad, you sneeze and your feet on the beach. That’s why people just drop by your house ‘on the way’ to somewhere else. That’s not geographically applicable in Canada.

My sister and brother live up here. Haven’t seen them in years. Probably because I’m an ass…but that isn’t the storyline here. Stick to the story.

I haven’t followed a team sport in years. Other than the Toronto Raptors, of course. Got to support the home team. I know TO has the Maple Leafs Hockey team as well but, come on guy… I’m Trini. You think we going to follow a game played on ice? Ice is for Rum and coconut water AT sports. Not THE sports.

Q. You’re going to be marooned on a deserted island and can only choose one food item. Of these, which would it be: macaroni pie, pastelles, roti or doubles?

Q. Even though you live in Canada, have you been able to keep abreast of all Fatima and alumni-related news and developments via social media and FOBA communication avenues?

I got kids, bro. You know how much time they take? They just introduced me to Legend of Zelda: Breath of the Wild. Major time-suck!

Even a thing as soft as water, over time, can wear away the densest of stone. Any obstacle, no matter how daunting, can be overcome with patience and persistence. It’s a powerful philosophy to live by.

Who reads to the end?

If you are the one ADHD kid that read to this point––a world of comedy awaits you my brother or sister. My details are above. Reach out and I’ll show you around 😃 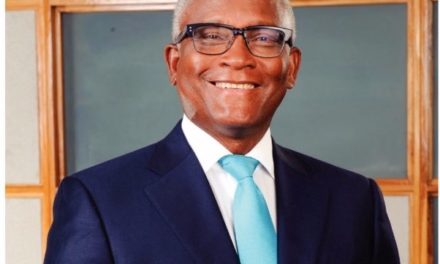 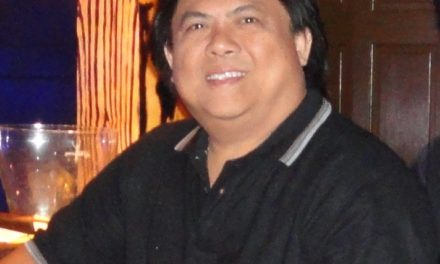 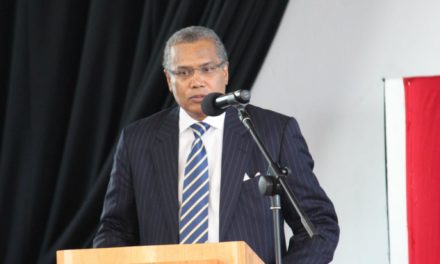 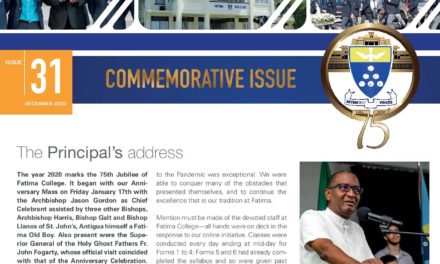